Scaleway is a European cloud service that provides an easy to use cloud infrastructure for a reasonable price. If you’ve ever used Digital Ocean they feel a lot like that but with fewer features. For this WordPress performance review I load tested 5 different server configurations (DEV1-S, DEV1-XL, GP1-XS, GP1-S, GP1-M) with caching both enabled and disabled using Kernl’s WordPress load testing service.

As with most of my load tests I followed a very simple LEMP setup guide that left me with the following software versions:

Configurations were mostly default for all of these, with the exception Nginx where I bumped up the file upload max size. Each server was in the Scaleway Paris data center and load was generated from Digital Ocean’s Amsterdam data center.

I performed 3 types of tests on Scaleway:

As with most of my cloud provider tests I used this blog’s content as my data source. This means that this test skews extremely read heavy.

The results for this battery of tests were interesting.

The clear winner without cache enabled was the DEV1-S instance, which was nearly 5x cheaper than the closest competitor. But what does that actually mean? It doesn’t mean that DEV1-S is better than GP1-L, only that it is right-sized for this type of workload. What if we look at the data in another format?

In this bubble chart, the x axis is cost in euros and the y axis is max sustained requests. The cluster in the upper-left corner of this chart is the best value for this type of workload. There isn’t a right answer here, but you can select GP1-S if performance is more important than cost, or DEV1-XL if performance is important but not quite as important as cost. It is worth noting that if increased the volume of requests we would likely see this graph shift in dramatic ways.

To see the results that drove this graph, scroll all the way to bottom of this page and you’ll see an image gallery that has all the raw data.

As you can see the machine stayed consistently at 23 req/s over the course of 6 hours. The response time distribution was good as well.

99% of requests finished in 98ms or less. Solid performance over a 6 hour period.

For the 2nd 6 hour test things were mostly the same with 1 minor change.

You can see that for a 2.5 hour period we had some (minor) performance degradation. Why? Maybe a noisy neighbor? While not a huge deal here, in some workloads losing ~5% of your capacity could be quite problematic.

Even though our capacity was slightly lowered, our response time distribution at 99% remained consistent at 98ms.

Our 3rd 6 hour test was similar to the first, except this time with a ~30% reduction in the 99th percentile response time (98ms to 69ms).

As you can see from the graph above that for our entire 6 hour period performance remained the same.

As stated above, the response time for this 6 hour period was 30% faster. I believe that this is due to the time at which this test was run. It was started at ~3PM EDT which is roughly ~10PM in Paris, so most of this test happened when internet traffic in the region wasn’t very high.

The final test that I ran was against a GP1-XS instance, for 45 minutes, with 1000 concurrent users. The WordPress install was using caching. Results were fairly good!

While the GP1-XS instance was having a little trouble keeping up, it still served the vast majority of the requests without error and managed to do so at 900 requests/s. The response time distribution was equally impressive.

Scaleway seems like a reasonable host if you need one in Europe, although their pricing seems expensive relative to other companies (Hetzner, Digital Ocean). I was a little concerned with the consistency of performance in the long-term test, but I don’t have any data for other providers to compare it against.

I’m not sure what the difference between Scaleway DEV and GP instances is besides price (maybe a better SLA on GP instances?), but the DEV instances seem like a much better value.

In short: Check out Scaleway if you need WordPress hosting in Europe. 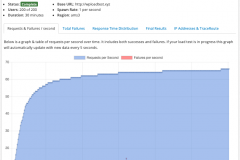 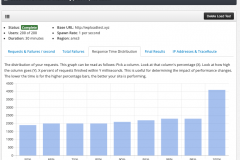 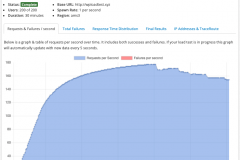 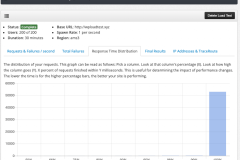 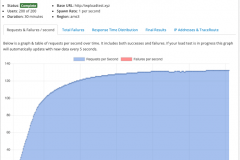 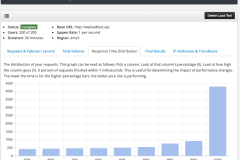 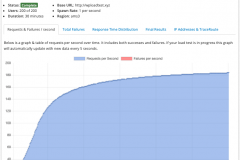 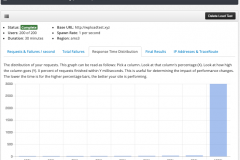 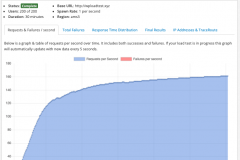 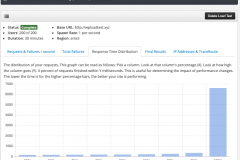 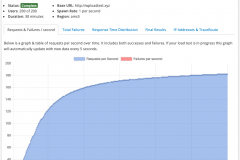 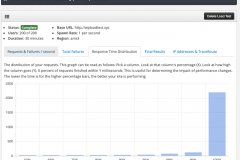 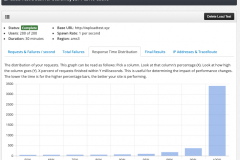 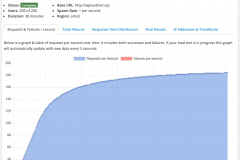 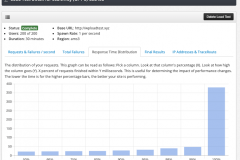 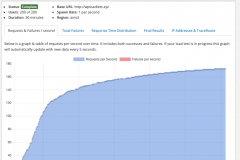 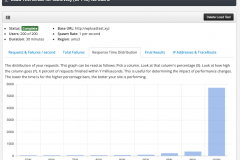 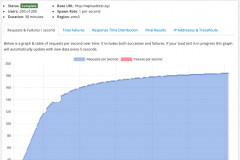 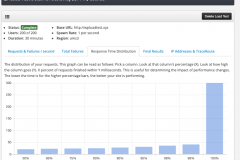 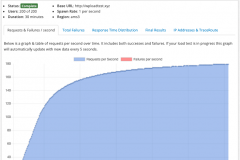